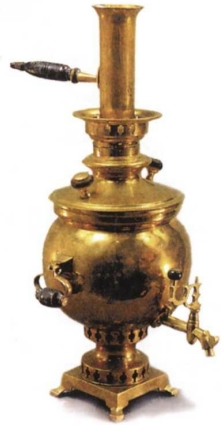 The largest center for the production of samovars at that time and later is Tula, which was rightfully called the samovar capital. There were factories with machine production and steam engines. Since the 1870s, the production of factories has been measured not by poods, but by dozens. Samovar products are widely conquering the market. In connection with the great demand for them and the desire to reduce the cost of production, the samovar is unified in form and decor. The main ones are samovars - "vases", "glasses", cylindrical "banks". They could be found in the families of workers, wealthy peasants, merchant houses, inns, tea-houses and taverns.

Samovars of the second half of the XIX - beginning of the XX century had a variety of everyday names, indicating the shape of the product: "bank", "glass", "vase", "egg", "acorn", "dulya" (in the form of a pear), "turnip "," Easter egg "," flame ", etc. When decorating samovars, ornamental motifs in the Russian style or in his variant -" Byzantine style ", in the style of" neoclassicism "," neo-rococo "and other historical trends, were popular. Decorated them and floral ornament in the fashionable manner of the "romantic" Art Nouveau. One of the favorite methods of color solution is the combination of red copper and brass.

The most common are samovars - "banks", smooth, Cylindrical shape. At cost, they were the cheapest, available for a simple, poor, human. It is this form that is chosen for tavern and store samovars intended for street trade.

Samovar "turnip", elegant, nickel-plated, was worth a little more expensive, and it was often called a merchant's.

One of the most popular forms is a "glass" - the body of the samovar narrows downwards, and its thin neck resembles a leg of a glass.

A samovar with a round body was called a samovar "ball". In Tula they were also called "Persian" - this was the form most often ordered for export, to the countries of the east: Persia, Turkey.

Still popular were "vases", but now their surfaces are minted by faces, "spoons", "columns", "medallions", "ovals". Some fragments of the body are decorated with engraving, manual and mechanical. The form of the vase has taken root and existed up to our time, because of its decorativeness it was used for the production of samovars intended for the nobility, high officials, the big bourgeoisie.