Russian samovar in the form as we know it today, appeared in the first half of the XVIII century. The structure of it is so perfect that it remained unchanged for centuries. Only the form, materials and decoration changed. In different localities of Russia this subject was called in different ways: in Tula - samovar electric or water heater, in Yaroslavl - samogar, in Kursk - samokipets, in Vyatka - samogrey. According to the definition of Vladimir Ivanovich Dal, the samovar is "hot water, for making tea, a vessel, mostly copper, with a pipe and a brazier inside." Its main purpose and features of the device: heating water with an internal pipe-frypot. 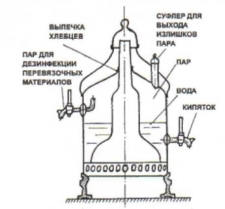 Internal design of a fire samovar

The samovar is more complicated in terms of design than heat, it is extremely simple. The case with handles, inside - a fire tube on a massive, but hollow base. A burning charcoal is placed in the pipe, and it continues to burn down on the grate in a stream of air that enters the holes in the base. The air heats up and, rising up the fire tube, gives heat to the water in the samovar, and not as in an electric samovar. The large surface of the pipe quickly brings water to a boil and maintains the temperature. The natural current of warm air upward creates a draft in the furnace. It is attached from below to the body of the samovar at some distance from the surface of the table, on which the samovar is put. The distance is regulated by the legs of the samovar, which gives it stability and fire safety. On the tube are put on the covers of the body, the burners, the covers of the pipe itself. Through the pipe, fuel is pawned and the samovar is kindled. For infusion of water, the lid of the vessel is removed. To fill the glass there is a convenient faucet with ground surfaces. The tap, with which water is poured from the samovar, is located a short distance from the bottom, so the slurry does not fall into the cup.

The most noticeable part of the samovar, often having a beautiful shape is the body, body or wall, as it was called samovarschiki. The body is filled with water for boiling.

The second detail, no less important - a special cavity for fuel, it is located in the center of the shell, inside. It was made in the form of a pipe and filled with coal. This pipe is called a brazier or a jug, since the shape often reminds it. At the bottom of the pitcher or brazier there is a grate on which fuel is put. The body is connected to the bottom part - the pallet, the base of the samovar, to which the legs are attached. The transition from the body to the pallet is called the neck - it is narrower than the body itself; In the upper part of the neck there are ashtrays - holes, usually decorated in a decorative manner, through which air passes necessary to maintain the combustion process in the brazier. Side on the body are handles - paired, curved metal plates with a wooden platen between them - for carrying the samovar.