The last quarter of the XVIII century brought a revival in the cultural life of the city. In 1777, a theater appeared in Tula, which opened its first season in a hastily rebuilt salt barn staged by Verevkin's comedy "So It Must" performed in the Rastrellian Baroque style. The house of the mayor of Ivan Liventsev (the end of the 18th century), standing on Dzerzhinsky Street, 15, with the entry gates in the style of early Russian classicism, which, unfortunately, is almost lost, and the house of the factory owner Larion Luginin on today's Mendeleyevskaya Street built by him In the 1860s. Now here is a teacher's college.

In 1762-1764, instead of the old one, a new, preserved to this day, the Assumption Cathedral in the Kremlin with a five-domed summit was erected. It was built by the Tula merchant class "on the money from the drink collection", that is, the profits received from the soldering of the population. 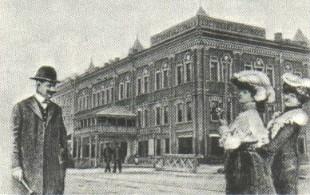 In 1778 the first public library was opened in the city, in 1786 - the Main People's College, among which was the future poet VA Zhukovsky, in 1798 - a permanent printing house.
The state of the city did not meet its new significance as the center of the province and was unsafe "from a fire case". Therefore, work started in the 60s of the XVI11 century on the redevelopment of Russian cities with the participation of prominent architects captured and Tula. August 20, 1779 Catherine II approved the plan for "regular" planning and building the city. In it, not known to us, the planner combined the progressive principles of regular construction of the XVIII century with the historically established structure of the city. Tula received the set boundaries. The wide fan of streets on the left-bank side of the city was oriented to the Kremlin. According to the plan, the rectangular development of Zarechie and Chulkova was preserved.
The planning of the city was accelerated by the name of several very peculiar buildings that have survived to this day, to be convinced of this: the house of the Noble Assembly, a strict, majestic form, with a beautiful column hall erected in 1856. Now it houses the garrison House of Officers (Lenin Avenue, 44). The tall, light three-tiered bell tower of the All-Sainted Church (1833-1863), large fires of 1779 and 1781-ies. At the entrance to Tula, the obelisks of the outposts were erected. From the southern - Kiev - outpost along the main street (now Lenin Prospekt) in the direction of the Kremlin are located many public buildings, including two large houses built in the 1780s for the presence of seats (now - the regional court and the cultural enlightenment school).
<<Previous Next>>
×
×