The ideas of the Narodniks also had a certain spread in Tula, but their petty-bourgeois utopian socialism could not seriously entice the Tula workers, although cruel exploitation and a miserable life aroused in the people a mass discontent with the existing order.

In the XIX century, the proletariat of Tula is growing rapidly quantitatively. Along with the existing weapons factories, in 1810-1820 autonomous factories and workshops arose in the city, which by the year of 1880 there were 53, numerous hardware and iron goods. In 1830-1835, as Lenin wrote, "the first Tula harmonies" appeared. Particularly widespread popularity they acquired after in 1870 Tula NI Beloborodoye invented chromatic harmony - the prototype of the modern bayan. Factories Vorontsov, Kiselev, many workshops produced the accordion - "Tula three-row, the most elegant." The city produced Tula gingerbread, which was in great demand. All these trades have become traditional for Tula. 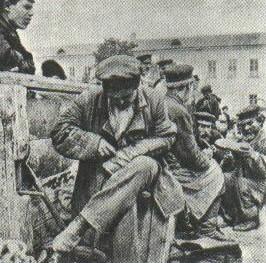 As in the arms business, the Tula people achieved in them truly inimitable mastery.
With a story about the heights of creativity, fiction, craftsmanship, achieved in products made of metal, wood, clay, other materials.
In 1873 one of the first sugar refineries in Russia was built in the city, in 1880-1881, near Chulkov, the shells of a cartridge factory were built, designed for the annual production of 30 million cartridges.
The working people of Tula were distinguished by their glorious skill. But in what terrible conditions he lived! An exhausting 14-16 hour labor, beggarly earnings, drunkenness, illness.
Working areas - Chulkovo, Zarechye - were drowned in mud. Even the gendarmerie authorities, in a private report for 1879, wrote that "the city government is very indifferent to the improvement of the city in both external and sanitary aspects."
An exceptionally difficult situation has arisen in health care. Probably, the word "health care" here simply does not fit. The authorities did not even think about protecting the health of the workman. The father of the writer V. V. Veresaev, a doctor by profession, testifies that the population of Tula was painful, weakly, many hardly lived to be 40 years old.
<<Previous Next>>
×
×