Most often it was in the form of the letter "G", with a handle attached to the vertical part of the pipe. The horizontal part - the knee - was attached to the hole-vent in the oven (the samovar was always placed near the oven), so that the smoke could escape through the chimney and the outer pipe on the roof. When the water boils, a teapot is installed on the burner, ceramic or porcelain, depending on the taste, habit or consistency of the owners. The thrust slows down, and the samovar on the wood slowly brings the water to a boil, qualitatively brewing the tea. Cheap, affordable fuel - the most common chips and charcoal - has played an important role in the growing popularity of the samovar on wood. At the beginning of the 20th century, samovars appeared, using a different kind of fuel - alcohol or kerosene - but none of the novelties could not replace the usual heat samovar.

Features of the design of the samovar

To make air in the samovar pipe, it must be "pushed", giving some initial velocity, blowing the pipe down near the grate. The narrowed samovar pipe is called a jug. Thanks to the pitcher's shape (the narrowing of the top of the pipe increases the frequency of its own oscillations), the samovar pipe managed to avoid a significant "buzz", which indicates the proximity of dangerous, destructive construction of vibrations. The inner diameter of the pipe, in its wide part, is the main samovar measure. This diameter determined all the dimensions of the samovar, its height and width, even the right amount of coals. 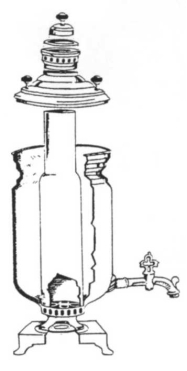 The other main part of the samovar is the body, or the body for water.

At the first Russian samovars it resembled a bowl (hemisphere). Over time, more suitable forms of a body resembling a bucket have emerged - an inverted truncated cone, as well as a more complex combination - the upper part of the cone, conjugated to the torus. In samovars with such a body, water first heats up below, then receives heat from the pipe throughout the volume. A serious design task was the connection of the body with the pipe. When the samovar is heated, the jug is red-hot, and the temperature of the body does not exceed the boiling point of water.

Russian samovarschiki, considering so different a mode of heating of a body and a pipe, connected them tightly only in one place. Thus, the pipe and body began to behave independently, avoiding thermal stresses, and therefore, cyclical warping, which usually lead to destruction. At the same time, the body and pipe, connected in one place.