The all-Russian political strike forced the tsar to issue a manifesto on October 17. The Tula Bolsheviks explained to the population that this was a deception, that it was necessary to prepare for an armed uprising against tsarism. A revolutionary working-class detachment was created. "The situation in Tula," wrote the governor of Osorgin, "can play a decisive role for this area and for Moscow. By strikes, rallies, meetings. December 9 in Tula and the province was introduced the position of enhanced protection. Having received news of the beginning of the 11th armed uprising in Moscow, the governor asked to immediately strengthen the garrison ...

The defeat of the first Russian revolution reduced the intensity of mass demonstrations. But the revolution did not give up, it re-formed forces.
Fall into the hands of the revolutionaries arsenal, the revolution would be armed really. " I. Osorgin, along with the police and a certain agent of the secret service from St. Petersburg, provoked a clash of demonstrations and burglars organized by Bolsheviks on October 21 from the Black Hundred. 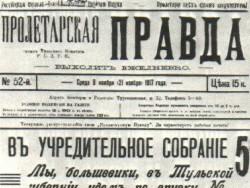 Armed workers were able to defend themselves, the Black Hundreds turned to flight. But the detachment of Cossacks called by the police chief opened fire on the demonstrators. Coming to their senses, the Black Hundreds helped the Cossacks complete the bloody affair. 100 people were injured, 25 - died in the fight. Among them, Bolsheviks A. Babyakin, N. Batishchev, A. Kazakov, P. Zyusman, N. Ryazantsev. The dead authorities were buried in the far corner of the city cemetery, not allowing the Tula people to honor their memory. But on the grave of the heroes today is a monument, and on the site of the fight, in the modern square. Lenin is an obelisk.
Bloody violence did not break the Tula workers. Continuing through the years of reaction, a new revolutionary upsurge, using the discontent of the masses of the First World War unleashed by the imperialists, the Tula Bolsheviks, like the whole party, conducted intense, persistent, day-to-day work. 1915-1916 years were marked by mass performances of chamber-keepers, railwaymen. Worried and military units.
And then came the year 1917. Already in January-February, Tula was shocked by a powerful strike of gunsmiths, to which workers of other workshops joined. And the morning of March 2 brought news to Tula that the hated tsarism had fallen, the February bourgeois-democratic revolution was over.
How many events took place in the next months! Sharp, sometimes with mistakes and miscalculations, the struggle for the masses, for the Bolshevisation of the Soviets, for the transfer of the full power to them.
<<Previous Next>>
×
×