In memory of the steadfastness of the insurgents, a granite obelisk was erected in the Kremlin about their peasant leader, the name of Bolotnikov is worn by one of the streets of Tula. 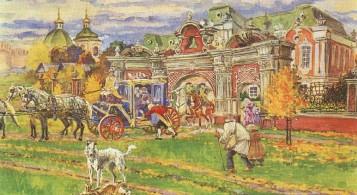 For almost five centuries there is the Tula Kremlin. Different times remember its walls. With the removal of the borders of the Russian state from Tula, it lost its defensive significance. For many centuries the attention of the authorities was not used, its wooden parts were gradually destroyed, dilapidated, destroyed by fires. But after the Great October Socialist Revolution it was taken under the protection of the state, and in 1964 for the first time a complex scientific restoration of the Kremlin began to restore its original appearance. This work continues today.
Around the Kremlin grew, the city developed. On the left bank of Upa, gravitating toward the Kremlin, there was a posad. According to the scribe book of 1588-1589, there were 882 people living in the city, of which 202 were military people who formed the garrison. 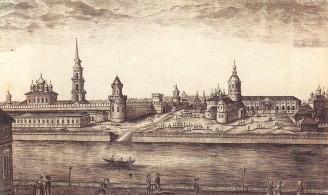 At the landing - only a few streets leading to the Kremlin, wooden small huts. And the townspeople, actually townspeople, were about 200. They traded in crafts, making articles of consumption and everyday use. All this can be bought in the market, which is located near the western wall of the Kremlin.
Slowly growing at first Tula. The Livonian War, the reign of Boris Godunov, Vasily Shuisky, the terrible years of the "Moscow ruin" during the Polish-Lithuanian intervention, frequent forays of the Crimeans did not contribute to the development of the economy.
However, by the middle of the 17th century the border of the Moscow State had advanced to the south. The raids in front of every commodity here are pegged, 33 shops in one iron row sell "knives, axes" and all sorts of other goods, then - meat, fish, fried, dye, pottery, even silver ranks. Snejut buyers, their brisk sellers call, puffing out all the goods.
Different people here trade: posadsky, archers and soldiers, the Cossacks began to threaten Thule, and it is gradually becoming an increasingly famous center of craft and trade.
Richer, Tula begins to dress in stone, life in her becomes more lively. In the Kremlin in 1684-1685 was built a five-domed stone Uspensky Cathedral, replacing the former wooden Assumption Church. Not far from the Kremlin, on the land, was built the Annunciation Church typical of the 17th-century churches of Chisinau (1692). This is the second in ancient times (after the Kremlin) the building that has survived to the present day in Tula.
<<Previous Next>>
×
×